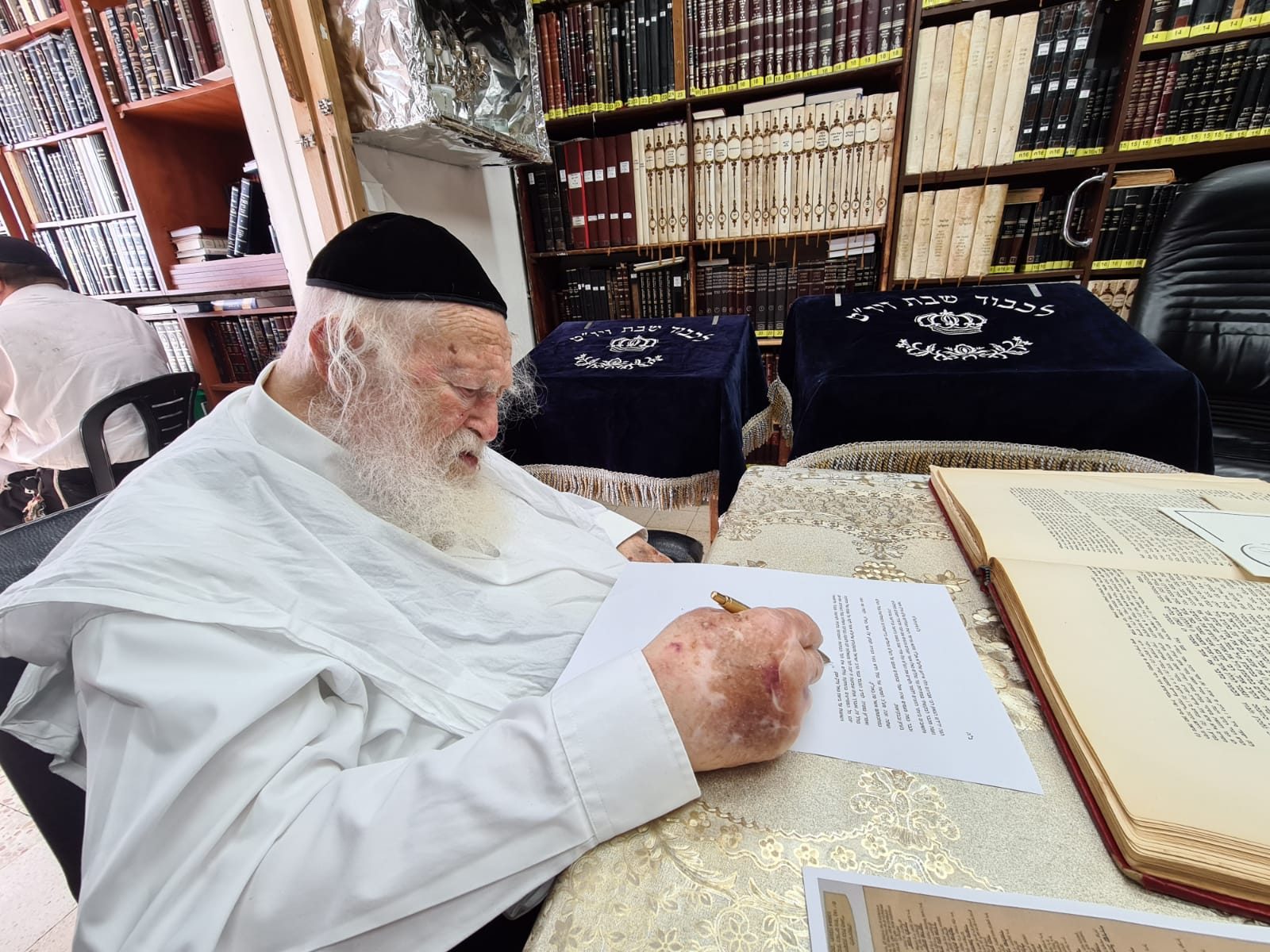 With the blessing of Sar Hatorah and Nasi of Shas Yiden, the UK takes a giant step forward as Torah study is being restored to its pristine glory.

On Rosh Chodesh Tammuz (June 23), Shas Yiden opened its first Kollel outside of Israel in Stamford Hill, London. This momentous occasion is accompanied by a special brocho and wishes from the Nasi of Shas Yiden, Sar Hatorah, Maran Hagaon Harav Chaim Kanievsky, shlit”a:

The Brocho of Sar Hatorah

…the Founder of Shas Yiden Kollelim Network who already responded to my request and opened additional kollelim in Eretz Yisroel where groups of incredible and outstanding talmidei chachomim have merited to study and complete the entire Shas every year with extraordinary diligence and clarity.

They have visited with me numerous times and I tested them on Shas, and they were amazing in their exceptional knowledge of the Shas in depth and entirety. And now he has merited to open a new Kollel in the capital city of London where the scholars will maintain the same study regimen and load as they do here at Shas Yiden in the Holy Land.

Over the last 11 years, Shas Yiden has completely changed the approach of the Torah world to the idea of learning and mastering the entire Shas (Talmud). In yesteryear, such a feat was indeed rare and very few individuals became a bona fide ‘Shas Yid’ and spent many years mastering tractates, many of them not regularly learned in yeshivos.

When the Pozna Rov, Hagaon Harav Avrohom Eisen, shlit”a, founded Shas Yiden, many across Israel and abroad scoffed at the idea of each of the resident scholars completing the entire Shas every year. After being tested annually by Harav Chaim Kanievsky, shlit”a, followed by his publicized lavish praise, the Torah world sat up and took notice. Then, some three or four times a year, these avreichim are put through their paces by the leading talmidei chachomim geonim of the Torah world with open, public oral examinations.

The avreichim not only fielded questions on both known and obscure topics from the entire Shas, but were expected to be able to recite the page and context of each answer. To a man, those testing them said that in all their years they had never witnessed such a phenomenon as Shas Yiden, where the entire student body were so proficient and all knew the entire Talmud, Rashi and Tosfos by heart.

At the most recent Siyum Hashas in last December, Maran Hagaon Harav Gershon Edelstein, shlit”a, Rosh Yeshiva of Ponevez, declared that the method of study at Shas Yiden and their accomplishments was indeed the correct way of Talmudic study for the true mastery of Talmud.

At Shas Yiden, acceptance is based on each avreich passing a detailed exam on at least 450 blatt, and who is prepared to adhere to the very demanding daily regimen. Each day they have to master 8 full Talmud folios with 4 revisions – totaling 40 blatt a day, which translates into 13,555 blatt per year. Already 4 Kollelim with 62 unique and outstanding Talmud scholars have changed the Torah landscape in Israel, and now Shas Yiden has begun its first foray into the Diaspora in London.

There are 12 hand-picked avreichim metzuyonim (outstanding scholars) who were tested by the Rosh Hakollelim, Hagaon Harav Moshe Isaac Samet, shlit”a, under whose direction the London Shas Yiden Kollel will operate. They, too, will undergo monthly in-depth tests on 225 blatt.

An official opening of the London Shas Yiden Kollel will be scheduled later in the year. To witness the prowess of the Shas Yiden avreichim, please click on www.shasyiden.com and then on ‘watch live farher’.